In view of the latest development of the epidemic, 1823 now focuses on handling calls related to the epidemic issues, and the waiting or processing time for other calls and cases received from written channels may be lengthened. We apologise for any inconvenience caused.

When terminating employment contract, is the employee entitled to payment in lieu of untaken annual leave? How to calculate the amount?

The daily rate of annual leave pay is a sum equivalent to the average daily wages earned by an employee in the 12-month period preceding the "date of termination of contract". In calculating the average daily wages, an employer has to exclude (i) the periods for which an employee is not paid his/her wages or full wages, including rest day, statutory holiday, annual leave, sickness day, maternity leave, sick leave due to work injuries or leave taken with the agreement of the employer, and any normal working day on which the employee is not provided by the employer with work; together with (ii) the sum paid to the employee for such periods. Please click this link to information on “ A Concise Guide to the Employment Ordinance - Appendix 1” (PDF).

In accordance with the reason for termination of employment contract, the number of days that the employee is entitled to payment in lieu of untaken annual leave is as follows –

#This refers to any untaken annual leave accrued in the previous leave year.

Note: Under the Employment Ordinance, an employee's entitlement to paid annual leave increases progressively from 7 days to a maximum of 14 days according to his/her length of service. 7 days are granted for each of the first 2 years, and an extra day is added for each of the following years up to the ceiling of 14 days. The following table shows the annual leave entitlements - 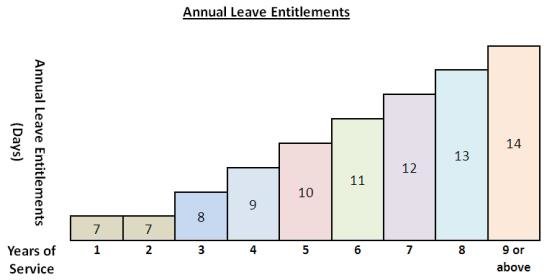 The is not a legal document. The Ordinance remains the sole authority for the provisions of the law explained.